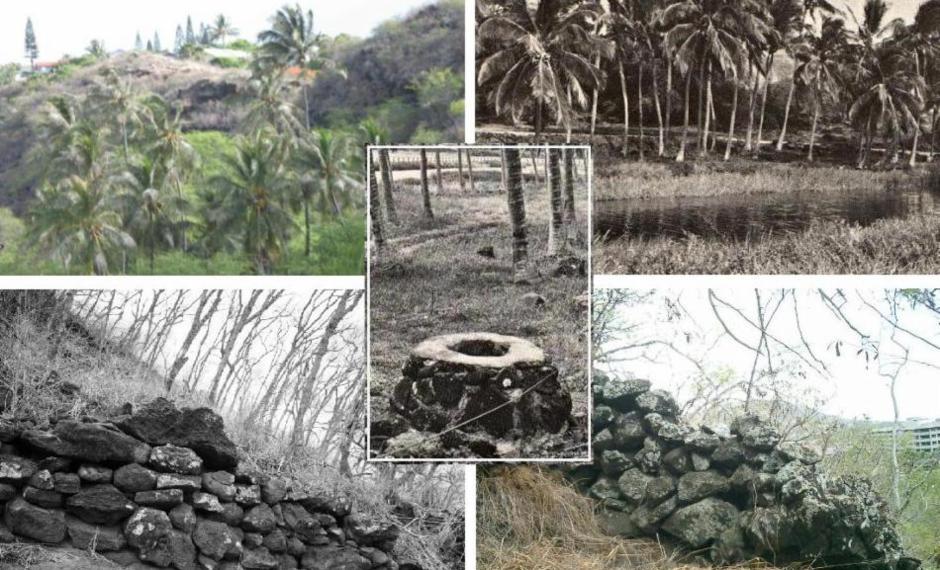 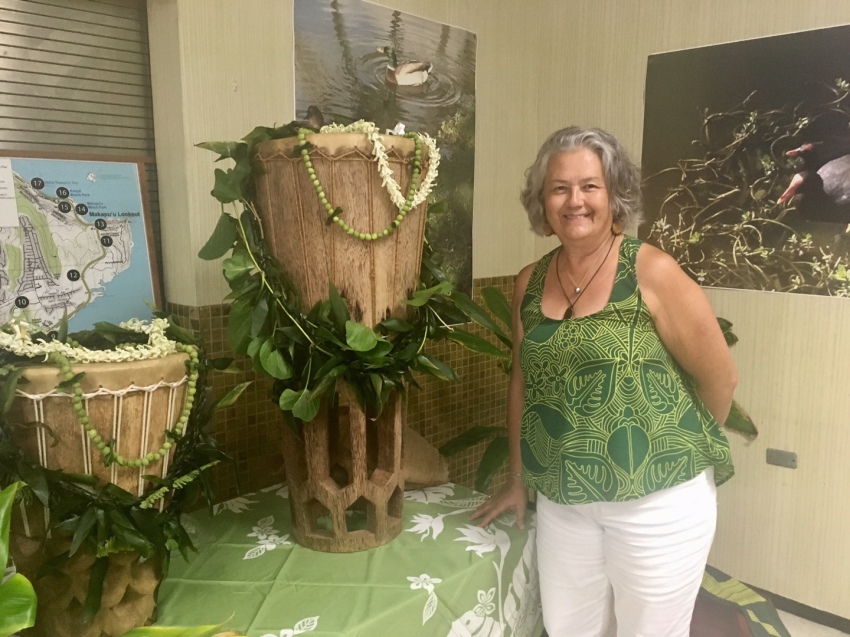 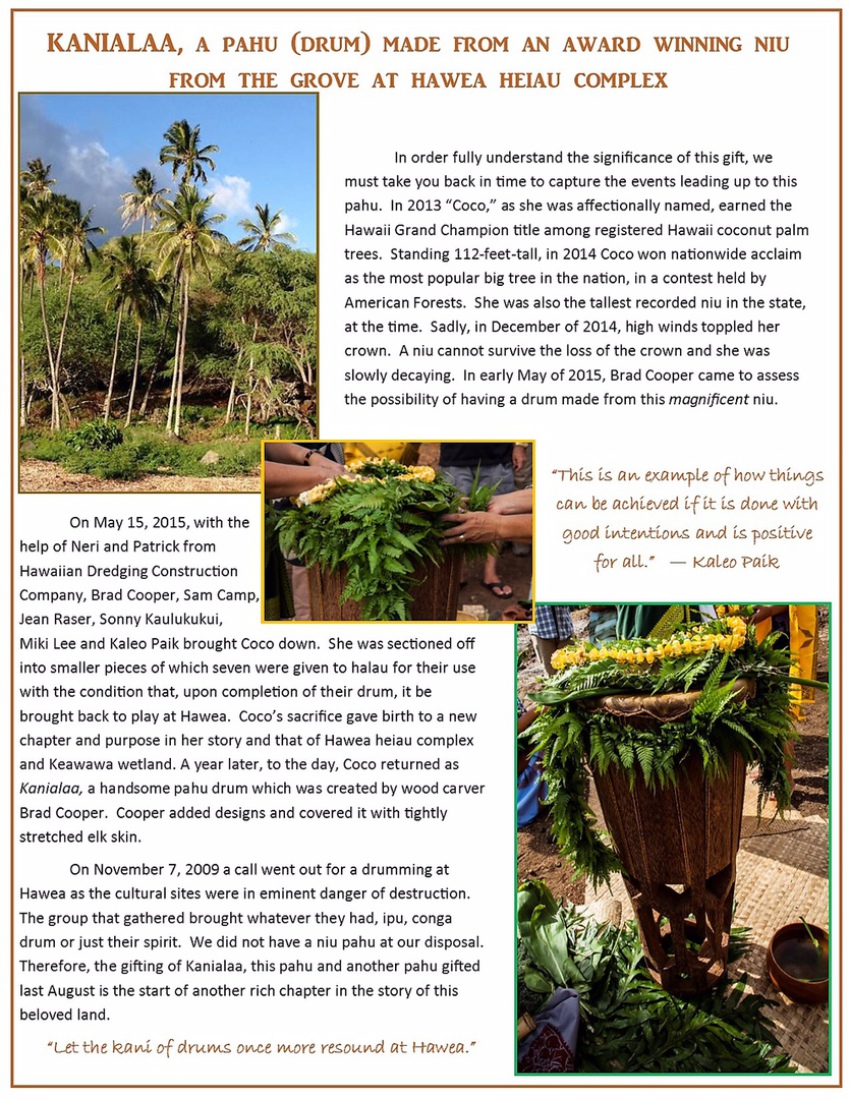 February 2017 -  Maunalua: Past, Present, Future: The Journey of Kani'a La'a Coco To Kania La'a with Kaleo Paik and Brad Cooper

Photos below are from the Hawea Journal (10/15/16 Volunteering at Hawea)  A little rain in the morning softened the ground just enough to make it easier to hand pull weeds in areas directed by Kaleo Paik. A small but very effective group dedicated to demonstrate their care for Hawea Heiau Complex and appreciation to have these precious lands protected, worked for 4 hours and achieved their morning goal...  While upland tending to Hawea, we noticed that a resident (who arrived by bicycle) took time to care for the native plantings.  To that volunteer whom we did not have a chance to greet, we say mahalo!  The native garden, like Hawea Heiau Complex, needs many helping hands.  Won't you consider joining us in November (Second Saturday) to demonstrate your appreciation of this special area? Kaleo Paik will lead a group upland to care for Hawea while Amanda and Carl will assist those interested in working in the native garden area. Three coconut trees are scheduled to be planted in the niu grove after the selected areas are cleared of weeds.  Side note: The red wheel barrel was gift from Kamehameha Schools in the early 2000's... it was the first equipment donation the Hui received for the Aloha Aina O Kamilo Nui project.  As you can see, the little red wheel barrel is still going strong! Mahalo to Kamehameha Schools! 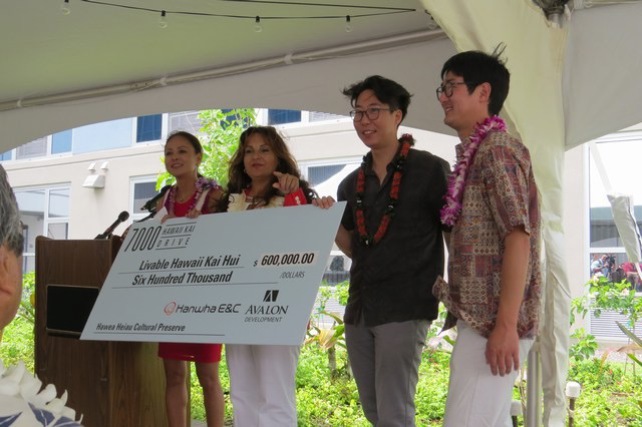 From the Hawea Journal (Donation celebration and recognition of partnership with 7000 Hawaii Kai Drive) Livable Hawaiʻi Kai Hui was presented with a check from Hanwha E & C and Avalon for $600,000 to further the work of preserving Hāwea and Keawāwa.

These monies had previously been given to the Hui and had assisted in funding work that had been done up to this time and will provide funds for stewardship into the future.  Mahalo! 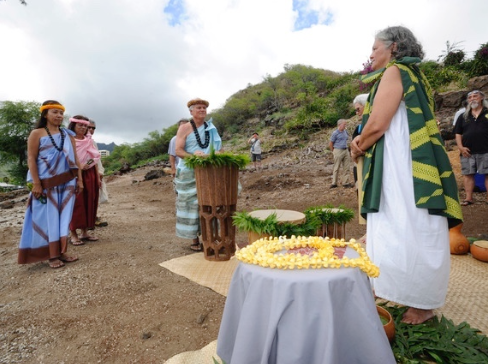 Once the 112-foot-tall apogee of an imperiled cultural heritage site and the most popular tree in the United States, “Coco” the coconut palm tree returned to Hawea Heiau on Sunday in a new form and with renewed significance for the surrounding community.

About two dozen organizers, volunteers and community members were on hand at the heiau, located off the intersection of Hawaii Kai Drive and Keahole Street, where educator and artisan Brad Cooper presented a specially crafted pahu (drum) made from the celebrated coconut tree to the Livable Hawai‘i Kai Hui, the organization responsible for preserving the nearly forgotten heiau.

“This is an example of how things can be achieved if it is done with good intentions and is positive for all,” said Kaleo Paik, a member of the Livable Hawai‘i Kai Hui.

In 2014, COCO was voted the most popular big tree in the country by readers of American Forests magazine. Months later, however, high wind sheared the crown off the tree, assuring its eventual demise.

By chance, Paik found herself on the same interisland flight with Cooper. After learning of the tree’s plight, Cooper volunteered to visit the site to see whether wood from the tree might be salvaged to craft a drum.

Ultimately, Cooper, Sam Camp, Jean Raser, Sonny Kaulukukui, Miki Lee and a couple of forklift operators from Hawaiian Dredging Construction Co. were able to bring the tree down without damaging any of the surrounding archaeological structures.

Cooper cut a portion of the base and over the course of five months crafted a unique tribute to both the site and to the legendary origins of coconut drums in Hawaii. The cutaway designs on Cooper’s pahu represent the hull of the canoe that the Tahitian voyager La‘amaikahiki used to travel to Hawaii, bringing with him for the first time a kaeke (temple) drum.

The drum was completed with elk skin drawn tight with sennit cords dating from 1932.

Seven other sections cut from the tree were given to local halau to craft their own drums. It’s hoped that once each group has finished their work, all will return to the site to play the instruments together.

The presentation of the pahu, dubbed Kaniala‘a, was particularly resonant given the contested history of the site, which was originally set aside for use as a parking lot and private park for the adjoining Hale Ka Lae (formerly Hale Ali‘i) condominium.

Livable Hawaii Ka‘i Hui intervened on behalf of community members who wished to prevent the destruction of the heiau, which contains petroglyphs and other features dating from its former existence as a pre-contact Hawaiian village. As part of an organized protest, the hui organized a “drumming” at the site in 2009.

In 2010 the group negotiated with the condominium’s new owner, Hanwha Engineering and Construction, to purchase the 5-acre site for $650,000.

In the years since, the group has overseen a massive clearing and restoration of the area. Future plans call for the construction of a traditional hale and storage for artifacts discovered at the site.

“There are no words that can competently express what it means to complete this process and achieve the dream we shared all those years ago,” Paik said. 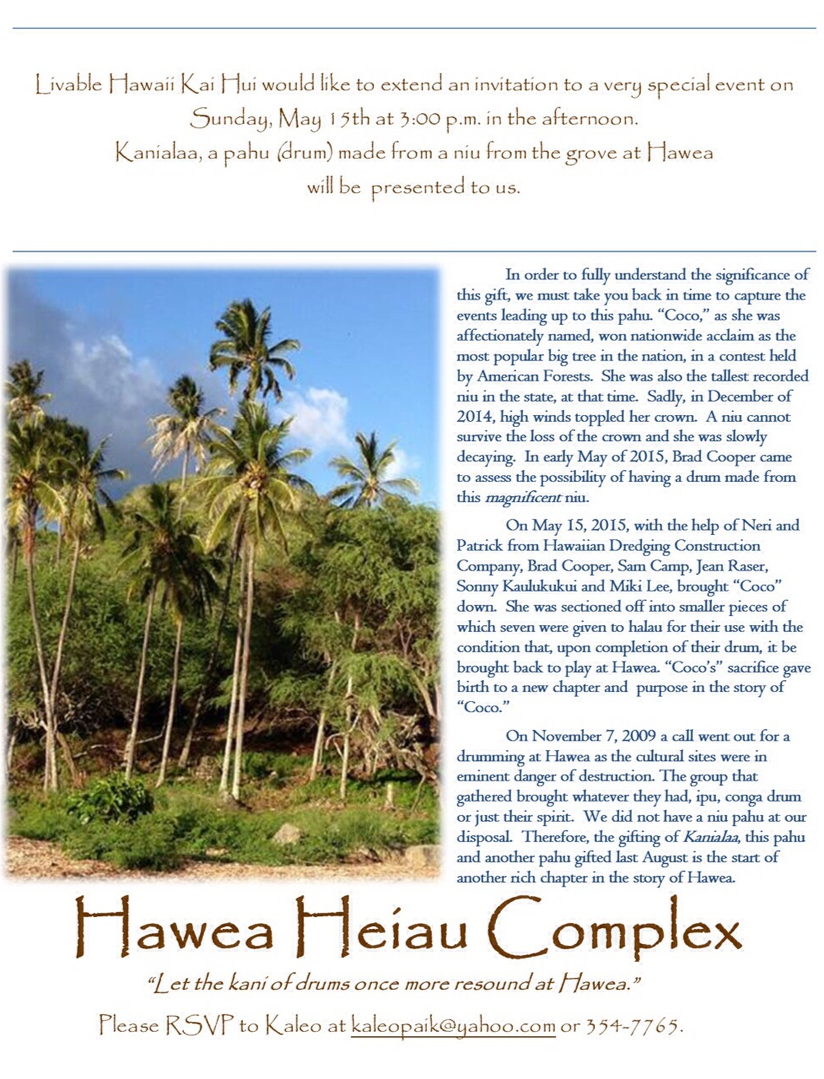 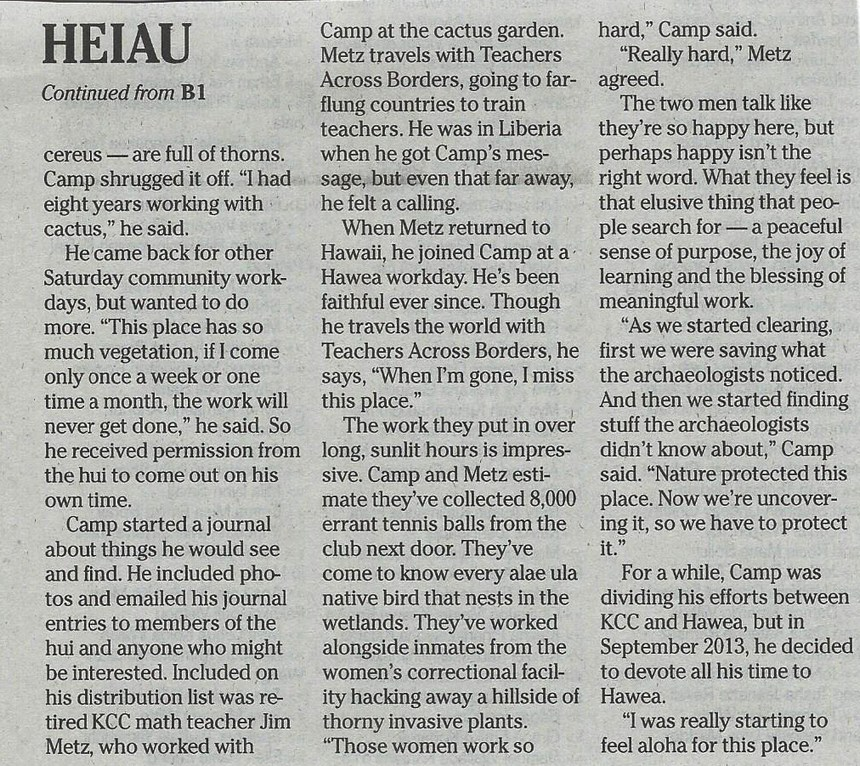 The DLNR announced that one of our tall coconut trees at the Hāwea Heiau Complex and Keawāwa Wetlands knocked out the two previous coconut co-champions and was crowned as a national champion in the American Forests’ Big Tree Program. The Big Tree Program is a nationwide competition to find the largest trees in the United States that are recognized as “champions” of their species. Our 112 foot niu dethroned the two previous coconut champions located on Moloka'i. Mahalo to Chris Cramer for entering our niu so it could be recognized nationally.